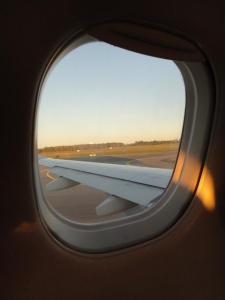 I don’t know when it was that I started having morbid thoughts each time I fly. They happened again last Friday morning, when in the moments before takeoff from Minneapolis I’d been having perfectly rational thoughts like which armrest was rightfully mine and whether I ought to claim it now, and whether the baby one row back was likely to cry for the whole ride or just for takeoff. But these thoughts scattered as the plane rounded the last curve and the runway yawned into view, when we straightened out and paused like a gymnast anticipating her mount and the engines roared to life and we started barreling down the runway and the only thought left was, Well, Jill, this is it.

Not: This is it, it’s time to fly to New York and see dad marry his long-time girlfriend. No, it was my recurring takeoff monologue: This is it. We’ll never make it. We’ll be nothing but a fiery ball in a moment. There’s no turning back.

And then, the real question:

Can you handle that?

It’s a test. A little test I administer to myself on every takeoff and landing. A gut check as to whether I could meet my inevitable end with acceptance and grace. It’s a decent proxy for whether I’ve been true to myself or not of late.

If outside matches inside, if actions reflect intentions, I feel a surge of peace in reassuring myself: It’s all right. I can go now. I’ve done enough on this solid earth. Let’s step into the air and not know if we’re coming back. My affairs are in order. The people I love know in their hearts that I love them. There is no disconnect here.

Then the captain came on and said we’d be reaching cruising altitude soon and my thoughts turned to ginger ale and pretzels and I knew the moment was over and that I had passed the test.

The wedding ceremony was simple; the couple was married. And when they said their vows “not a single eye was dry,” as one of the bride’s friends put it. When they turned to walk down the aisle, arm in arm as new husband and wife, my father smiled out at the assembled congregation, but when his eyes met mine his nose wrinkled and his eyes threatened to cry. I seem to have that effect on him of late.

The bride and groom are both 75. My father learned he has stage 4 cancer this spring. He just finished several rounds of palliative chemo prior to his wedding day. I took many pictures that day, and in some of the shots in the church his face had the same good color his bride did, but in the pictures I took in the bright sun my father seemed to blaze and disintegrate before my eyes.

At the reception I was seated next to the bride’s neighbor, a woman who lived in the same modest apartment complex in Port Washington. Unaccompanied at the wedding like me, she and I talked for a bit. After a few minutes it came out that my family had spent a recent year in Berlin.

“Oh, do tell me about Berlin!” she gushed, putting down her fork. “Tell me what it’s like there. And forgive me if I get weepy. I know I’ll never see it for myself.”

I looked at her to try to gauge what kind of information she was after. She looked able-bodied enough to contemplate her own trip.

“But why can’t you see it for yourself?” I asked. “There’s no reason not to go.”

She shook her head. “Oh no, my traveling days are behind me now,” she said. “But tell me what it’s like.” She looked at me expectantly.

And so, offered the stage, I launched in. I said that even though the Berlin Wall came down 25 years ago, there are still echoes of East and West in the city. That since the Wall fell, all the investment has had to go into restoring the former eastern part of the city, where Museum Island and so many stunning works of architecture were left to crumble during Soviet times, and how little has been done to keep up the infrastructure in the western part of the city since Reunification. Residents seemed to have been okay with that for decades but now it’s enough and they want to see some investment in their neighborhoods too.

I checked to see if the woman was bored yet, but she seemed to want to hear more, so I went on.

I told her how the city, though it’s attracting young people and has a cutting-edge cultural scene, feels like it’s about 20 years behind other European capitals because of the economic constriction of the Wall. How no suburbs cropped up because the city stopped at the edge due to its artificial boundary. I said how amazingly affordable it is, how even very poor people can manage to make a life there. And I told her how impressive it is that almost everyone speaks English, quite good English in fact, and how homeschooling is illegal—

“Illegal!” she exclaimed, as I knew she would.

She wanted to know where our girls went to school in Berlin, and then she wanted to know if there are many Catholics in Berlin because she’s a Catholic. And by the way she’s looking for a Bible-based church on Long Island, and might I have any advice for her about how to find one? I did not. She then turned to the woman to her left to pose the same question, and they began to talk in earnest about the pleasure of studying Bible passages. I dug into my pasta with vodka sauce with renewed interest. Talk of Berlin had clearly passed, so when my sister suggested we switch seats so I could take a turn sitting by my father, I was grateful.

I thought about the Wall again the next day when my dad and his new wife drove me, my daughter, and my sister around the tony part of Port Washington, where the Vanderbilts and Hearsts once made their homes. There’s no wall between the rich enclave of this land of mansions sitting on the edge of the twinkling bay and the rest of the town, but there may as well have been. There are real walls, the kind that eventually get denounced and torn down, and then there are metaphorical walls, the kind one puts up to separate one class from another. And then of course there’s the other type of wall, the kind one puts up between oneself and everyone else, the sort one erects to keep one’s own truths from crashing in.

I have seen, or felt, those invisible walls of late. And done what I can to remove them. Because what, after all, is a wall, other than something one ought to tear down?

Driving home from summer vacation this August M had pulled out a Pink Floyd album from his backpack that I’d had no idea he’d packed for the trip, and by the time the album reached its apex and shook the walls of our van with its refrain, Tear down the wall, tears coursed down my cheeks and I began to understand why.

In Berlin there was a day when I’d been walking down Eisenacherstrasse near our apartment when suddenly it hit me that I hated that I’d just dyed my hair a dark brown to hide my grey under a false, manmade color. As if a box of chemicals could stop the march of time. With a feeling of dread I realized that doing so had just laid one more brick between me and my own true self, and that the brick was placed rather high on some invisible wall I’d erected over the years, and that I could no longer see over or around this wall. It was the first time I even realized that there was such a wall between me and the self I wanted to be, and how dreadful it was that my own actions did nothing but make the wall higher. And I vowed then to do what I could to tear down that damn wall, whatever on earth that might mean.

After the road trip to the east coast this summer M and I talked a lot at first, and then not at all, and then we did again. And in one of the times we talked M said that in recent years he seemed to have put up a wall between himself and the rest of the world, including me. It felt like it was at least four feet thick, he said, and it was probably time to see about tearing it down. And I hadn’t even said anything to him about walls, not yet.

On the flight home after the wedding I sat beside C just as I had on the way out, and as we passed from Wisconsin into Minnesota the captain came on the speakers with the update that there was a lot of wind in Minneapolis and that we should hold on for a rough landing. A few minutes prior I’d been wishing I were out on the Mississippi for afternoon practice that day, but when I heard that winds were 25 mph I knew rowing was out of the question. We were seated behind the wing and I could see how the plane pitched in the gusts of wind.

As we came in for our landing I rested my hand on my daughter’s knee to comfort her, I told myself, but my grip tightened on her leg as I thought yet again, Well, this is it… I tried to reassure myself with the image of my wall, torn down now to just a few layers high, below my knees perhaps, and I could see the other side and it was grassy and sunny and alluring. But I knew in my heart I hadn’t yet stepped over that wall, and something welled up inside of me to the effect of No! I’m not ready yet!

Somehow failing my own test this time didn’t feel like failure.

4 thoughts on “Prepare for takeoff”